November 13, 2019 marks the 155th anniversary of John Wilkes Booth’s introduction to Dr. Samuel A. Mudd at St. Mary’s Church in Bryantown. The meeting occurred as a result of John Wilkes Booth’s October visit to Montreal, Quebec. While in that city, Booth met with a southern Marylander named Patrick Martin. Booth was in search of contacts in Charles County and Martin provided him with at least one and possibly two contacts.

History tells us that Martin gave Booth a letter of introduction to Dr. William Queen and, quite possibly, Dr. Samuel A. Mudd.[1]

Dr. Mudd recalled the meeting in his written statement of April 22, 1865. He stated, “I have seen J. Wilkes Booth. I was introduced to him by Mr. J.C. Thompson, a son-in-law of Dr. William Queen, in November or December last…Mr. Thompson at the time that Booth was looking out for lands in this neighborhood or in this country…”[3] Thompson later testified that Booth stated his purpose for visiting Charles County was to purchase land.[4]

The timing of Booth’s visit was no accident. Maryland’s controversial new constitution, which emancipated slavery in the state, went into effect on November 1. The measure deprived slave owners, Dr. Mudd included, of their principle source of labor. The loss of slave labor threatened to destroy the economy of southern Maryland’s plantation agriculture. One week later, President Lincoln was overwhelmingly re-elected for a second term in office. To make matters worse, the military situation continued to worsen. Petersburg and Richmond had been under siege since the summer and General William T. Sherman was just about to begin his famous “march to the sea.” The situation for many white southern Marylanders had reached the point of desperation and John Wilkes Booth entered Charles County at that exact moment seeking help.

Putting these events in context makes it seem highly unlikely that Mudd and Booth simply discussed buying land in their churchyard meeting. Since August, Booth had devoted his time and energy to building a plan to kidnap President Lincoln and take him to Richmond. Mudd’s cousin, Dr. George Mudd, stated in an 1883 interview “there is no doubt of his having been connected with a previous intention of Booth to kidnap or abduct the president…”[5] 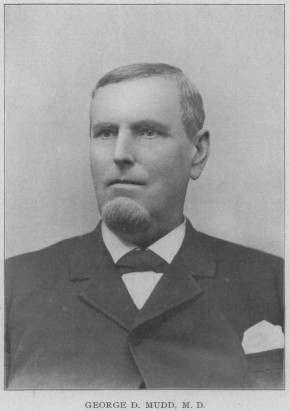 Whatever the actual conversation involved will never be known. However, history tells us that Dr. Mudd met John Wilkes Booth at least one, but more than likely two more times prior to the assassination. On those occasions, Mudd introduced Booth to Thomas Harbin and John H. Surratt Jr. Both men factored heavily into the kidnapping scheme.

Histories of the Lincoln assassination right fully focus much attention on the tragic events of April 1865. The story of the assassination and manhunt seem too astounding to be real. However, it must be remembered that for Dr. Mudd and Charles County the story began with a simple churchyard meeting in November 1864.

[1] Testimony of Eaton Horner in Ben: Perely Poore ed., THE CONSPIRACY TRIAL FOR THE MURDER OF THE PRESIDENT, AND THE ATTEMPT TO OVERTHROW THE GOVERNMENT BY THE ASSASSINATION OF ITS PRINCIPAL OFFICERS (Boston: J.E. Tilton and Company, 1865), Vol. I, pg. 430.

View all posts by drmudd

Make a Donation to the Society!