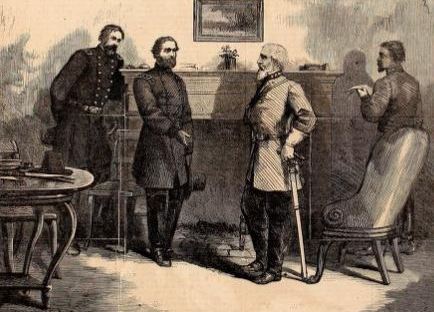 155 years ago today, Dr. Mudd’s brother-in-law stood in the ranks of the Army of Northern Virginia as it was surrendered at Appomattox Courthouse. He soon found himself in prison alongside Dr. Mudd, transferred to one of the North’s most notorious prison camps, and later playing a major role in helping Sam gain his freedom.

April 9 marks the 155th anniversary of the General Robert E. Lee’s surrender to General Ulysses S. Grant at Appomattox Courthouse. Lee’s surrender marked the beginning of the end of the American Civil War and undoubtedly played a role in the assassination of Abraham Lincoln less than one week later.

Among the thousands of Confederate soldiers present at Appomattox was thirty-five year old Thomas O. Dyer. Dyer was a private in the famed Washington Artillery Battalion from New Orleans, Louisiana. Tom was also the brother of Mrs. Sarah Frances Mudd.

Tom was born on the Dyer family farm near Bryantown, Maryland in 1830. In 1852, he moved to New Orleans and found employment in the mercantile industry. In May 1863, Tom returned to Maryland to help his older brother Jeremiah open a dry goods store in Baltimore. Shortly after his arrival, Tom learned that he was eligible to be drafted into the Union Army. Late that summer, Dyer made his way south and crossed the Potomac. He was in search of the Army of Northern Virginia. Specifically, Tom was looking for familiar faces from New Orleans. He found them camped near Orange Court House, Virginia.

General Grant’s lenient terms of surrender allowed former Confederate soldiers to sign a parole. The parole granted them access to Union transportation and food supplies as they traveled home. All that was required was the soldier’s signature and promise to never again take up arms against the government of the United States. The Union army printed 30,000 parole forms and had them ready for signature on April 10. [2]

For unknown reasons, Thomas Dyer’s name does not appear on the list of Appomattox parolees. Perhaps Thomas simply wanted to return home as quickly as possible and left Appomattox following the surrender on April 9 before the parole forms were printed. Perhaps he chose not to sign a parole in a final act of defiance. History still holds the answer to the question.

Thomas made his way from Appomattox back home to Bryantown. His timing could not have been worse. His arrival coincided with the Federal manhunt for John Wilkes Booth. Thomas was arrested on April 25 for not having a signed parole. Eventually, he was transferred to the Old Capitol Prison in Washington. Ironically, Thomas would have been greeted by another familiar face. Dr. Mudd had been arrested just before Tom’s arrival in Bryantown and was being held in the Old Capitol Prison. The two were together for less than one week when Dr. Mudd was transferred to the Old Washington Arsenal Penitentiary on May 4, 1865 to stand trial for Lincoln’s assassination.

Tom remained in the Old Capitol Prison after Sam’s departure. It is very likely that he had a visit from his sister on May 9, as Mrs. Mudd was in Washington and signed a loyalty oath at the prison that day. Either Tom was not given the opportunity to sign an oath there or he refused to do so and was transferred to the prisoner of war camp at Elmira, New York on May 11.  He remained there until June 21, 1865 when he finally signed an oath of allegiance and was released.

In October, Tom made his way back to New Orleans where he resumed his former job.[3] Due to his location along the Gulf of Mexico, Tom was the closest geographic relative to Sam while in prison. As such, he became an important lifeline for the confined doctor. When Sam arrived at Fort Jefferson in August, bureaucratic red tape was keeping much of his mail from reaching him. In November, Tom made contact with Major-General Philip Sheridan who was the commander of Military Division of the Gulf. Tom was successful in getting Sheridan to grant him written permission to send Sam a box full of supplies. Everyone in the family was relieved when Sam graciously wrote home asking Mrs. Mudd to thank Tom for the “fine clothes, several cans of vegetables, fish, whiskey, etc.” Although Sam disappointingly noted “the whiskey was not received.” Tom kept the habit of sending Sam money, newspapers, and supplies throughout his nearly four-year incarceration. Tom’s usual monetary contribution was $30 and he mainly sent “edibles” in the boxes. Sam even became so bold as to request supplies from Tom when the prices became “very high at the post sutler’s.” [4]

Tom was equally important in role in trying to help obtain a pardon for Dr. Mudd. As early as November 1865, Sam was insisted that if the family could obtain official papers enacting his release they should “telegraph it to Tom, and tell him to notify me from New Orleans.”[5]

Tom also committed to financially support legal efforts to free his brother-in-law. In 1867, Tom received a letter from his brother Jeremiah in Baltimore. The letter indicated that Jeremiah had found a lawyer who was willing to take Sam’s case through the appeals process for the cost of $1000. Tom immediately wrote his brother that he pledged $500 to the cause, challenging Sam’s “praying friends” to raise the other half of the fee.[6]

When President Andrew Johnson decided to grant Dr. Mudd a pardon in February 1869 Tom played a key role in the process. After being summoned to Washington and receiving the pardon, Mrs. Mudd attempted to take a steam ship from Baltimore to Dry Tortugas, Florida to deliver the papers in person. However, she missed the ship and another was not scheduled to leave for two weeks. She decided to risk sending Tom the documents by express. They safely reached him a few days later. He paid a Mr. Loutrel $300 to deliver them to Fort Jefferson. The papers arrived on the island on March 8 and Dr. Mudd began his journey home.[7]

Thomas Dyer lived in New Orleans the remainder of his life. He continued his work in the mercantile industry until the end of his life. In 1875 he married Marie Winchester. The couple had one daughter named Mary Frances. Tom died on November 27, 1891, remembered by family and friends as a “veteran of the Washington Artillery and a prominent figure” for his small part in the history of the United States.[8]

[2] “Paroling the Army of Northern Virginia,” National Parks Service (US Department of the Interior) https://www.nps.gov/apco/learn/historyculture/parole-passes-a.htm

View all posts by drmudd